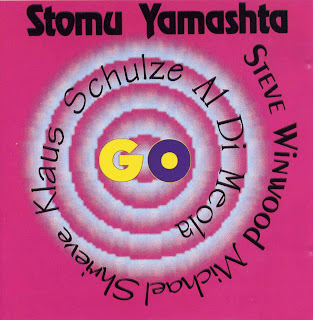 # from the Go album

A relic from the prog-rock years, Stomu Yamashta’s Go was quite a superstar band of its time in 1976. It had Steve Winwood, dragged out from hibernation following the collapse of Traffic, Michael Shrieve the drummer from Santana, Al DiMeola the hot guitarist from Chick Corea’s Return To Forever and the German electronic musician Klaus Schulze [Tangerine Dream, Ash Ra Temple]. How on earth they all gathered to report to work under Japanese jazz-rocker Stomu Yamashta is probably buried under a mountain of mouldy UK music weeklies.

This concert, said to be recorded on May 29, 1976 at London’s Royal Albert Hall, was probably the first public performance of Go. Nobody is certain whether this date or venue is correct. This recording appeared in the late '80s/early '90s on a bootleg label Kiss Deluxe. They claimed the year as 1976 in Europe. Hardly helpful but the sound quality is exceptional and from the stereo soundboard.
Posted by marram62 at 2:54 AM 8 comments: 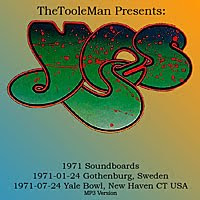